Here is how the term microbusiness–and related terms–are being defined.

Number of Employees in a Microbusiness 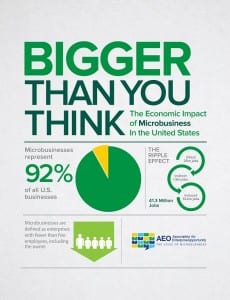 defined as “a business with five or fewer workers.”  AEO defines it the same way (see image “Bigger than You Think“) but adds “including the owner.” Wikipedia, however, identifies a micro-enterprise as a “small business employing 10 people or less.” Wikipedia has an international slant, which may account for the difference. This entry also attempts to distinguish between microbusiness and the related term microenterprise, which “have the same meaning, although traditionally when referring to a small business financed by microcredit, the term microenterprise is used. Similarly, when referring to a small, usually legal business that is not financed by microcredit, the term microbusiness is used.” (Note: Wikipedia isn’t the most viable reference; it can be updated by anyone. It doesn’t represent a comprehensive, unbiased view of this topic. We use it here only to make a comparison and open the floor for further discussion.) For more specific information about microenterprise, the impact of microloans in the U.S., and the microenterprise development programs that support these businesses, visit the Microtracker.org and its Field Trendlines Series Issue 8 (May 2015).

Financial circumstances for microbusiness are improving. Quarterly reports throughout 2014 show less need for entrepreneurs to dip into their personal saving and/or struggling with cash reserve. (Source: Sam’s Club Report – The State of Microbusiness in 2015. A Year in Review) 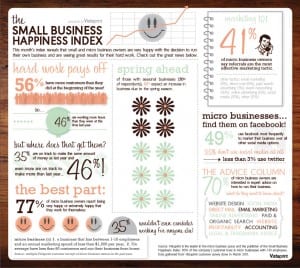 ting the year “in higher spirits and with higher expectations than one year ago.” According to the Vistaprint Small Business Happiness Index, 77% “report being happy or extremely happy that they work for themselves.”

Here are noteworthy reasons why microbusiness owners started their businesses, according to The State of Microbusiness in 2015. A Year in Review:

Based on these defining factors, do you (or would you) refer to yourself a microbusiness owner? Why or why not? Does it have implications you don’t like? Is this terminology confusing for entrepreneurs or sole proprietors in defining their businesses? Does your sentiment match the research? What ideas do you have on the subject? Feel free to contact us with your thoughts, or leave a comment below.

Looking for something specific?

This website uses cookies to improve your experience while you navigate through the website. Out of these, the cookies that are categorized as necessary are stored on your browser as they are essential for the working of basic functionalities of the website. We also use third-party cookies that help us analyze and understand how you use this website. These cookies will be stored in your browser only with your consent. You also have the option to opt-out of these cookies. But opting out of some of these cookies may affect your browsing experience.
Necessary Always Enabled
Necessary cookies are absolutely essential for the website to function properly. This category only includes cookies that ensures basic functionalities and security features of the website. These cookies do not store any personal information.
Non-necessary
Any cookies that may not be particularly necessary for the website to function and is used specifically to collect user personal data via analytics, ads, other embedded contents are termed as non-necessary cookies. It is mandatory to procure user consent prior to running these cookies on your website.
SAVE & ACCEPT